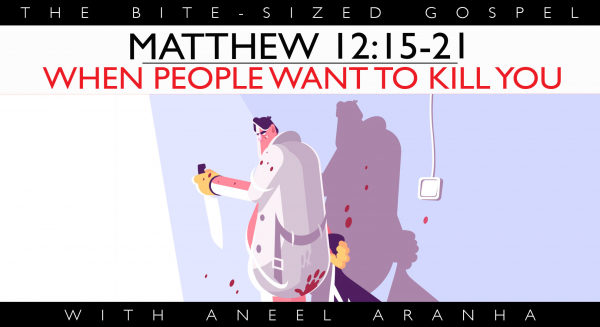 Aware of this (that’s the Pharisees plotting to kill him), Jesus withdrew from that place. A large crowd followed him, and he healed all who were ill. He warned them not to tell others about him. This was to fulfill what was spoken through the prophet Isaiah: “Here is my servant whom I have chosen, the one I love, in whom I delight; I will put my Spirit on him, and he will proclaim justice to the nations. He will not quarrel or cry out; no one will hear his voice in the streets. A bruised reed he will not break, and a smoldering wick he will not snuff out, till he has brought justice through to victory. In his name the nations will put their hope.”

Legalism is a killer. Sometimes literally. When we write our own rules and give them more importance than God's rules, it is infuriating when people don't keep them, and we often want to destroy them. What is true of us was true of the Pharisees of Jesus' time. They became so angry that he wasn't keeping the rules they had made they decided to kill him.

Jesus had quite a large following, and he could have instigated a rebellion against the religious leaders, but he didn't. And although he had come to die, he didn't permit them to kill him because his time had not yet come. He still had his message to proclaim, and until that was done, nobody was going to lay a hand on him. But that was only one half of today's passage. The second half contains a prophecy of Isaiah about Jesus, which teaches us a few things about the nature of Jesus that we might do well to emulate.

One, Jesus is referred to as a servant. It is not something that bothered him at all. In fact, on one occasion, he got to his knees before sinful man and washed his feet, doing something only a servant would do (see John 13:1-17). How many of us would be able to do that without flinching? Jesus once said, "Whoever wants to become great among you must be your servant, and whoever wants to be first must be your slave— just as the Son of Man did not come to be served, but to serve, and to give his life as a ransom for many" (Matthew 20:26-28)

Two, Jesus was God's chosen one, and obedience to the Father's will pleased the latter immensely. Especially obedience to death. Most of us recoil at the thought of death, and I wonder how many of us would be willing to die for our faith.

Three, he would be filled with the Holy Spirit. If we recall the baptism of Jesus, we would remember that the Holy Spirit came upon Jesus like a dove, and a voice from heaven declared these very same words prophesied by Isaiah. Now we, too, have the Holy Spirit, don't we?

Four, Jesus was gentle and meek. Although he had many confrontations with the religious leaders of his time, he never entered into a slanging match with them or noisy arguments. There is a big lesson for us over here. Sometimes we might need to debate a point, but we must do it without getting worked up or defensive.

All these things might require some practice, but if we can do that, then the world might get hope that they can do that too. Let us remember that our enemies, no matter how formidable they might seem, can't do anything to us if God is by our side. So let us be like Jesus and be victorious in every way.